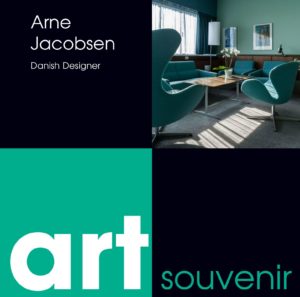 Arne Jacobsen (1902–1971) was an architect and designer whose elegantly functional style has become virtually synonymous with modern Danish design. From his iconic chairs to his innovative faucets, from sleek tableware to complete architectural and interior design projects, Jacobsen’s prolific output has had a lasting international legacy, with many of his designs still in continuous production today.

This book was written and designed by Teit Weylandt, a former employee and close collaborator of the late Arne Jacobsen.

Teit Weylandt (b. 1941) studied at the Royal Danish Academy of Fine Arts in
Copenhagen. He was a member of Arne Jacobsen’s design firm from 1966 up until Jacobsen’s death in 1971. Subsequently he has worked for the architects Dissing + Weitling (who continued Jacobsen’s office), becoming a partner of the firm in 1985.